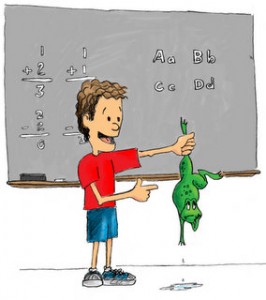 I had the honor today of speaking at the 2012 “Navigating Your Writing Life” Symposium of the Virginia Writers’ Club. Only in its second year, the symposium is an opportunity for Virginia writers to come together to discuss topics of importance. This year’s program included sessions on finding an agent, marketing eBooks, hooking readers, and more. The keynote address was given by Charles Shields, the biographer of Harper Lee and Kurt Vonnegut. Charles is a terrific speaker and did not disappoint.

But the purpose of this post is to report some of what I talked about in my session, which was called “Show AND Tell.” My basic point was that the traditional advice that all writers hear—Show, Don’t Tell—is misleading. In fact, most effective writing includes a balance of showing and telling. While showing is critical for creating a “felt experience” for readers (to quote Janet Burroway), there are times when a writer will need to “tell.”

We first discussed “showing” and some of the techniques for doing that effectively. These include using specific, concrete details in dialogue, description, and action. (Don’t say, “He was angry”—create a character who acts angry, looks angry, or speaks angry. See Creating Fiction by Fred Leebron and Andrew Levy.) To achieve work that is vivid on the page, leave out the psychological adjectives and replace them with connotative details, especially those that evoke the senses: sight, sound, taste, touch, smell. Also, the felt experience may be diminished by filtering language (she heard, he saw, etc.), when the scene could be rendered more immediately. Show the sound and the sight.

But there are times when “telling” can be useful and the most efficient way to move the story forward. For the sake of pacing, for example, you may need to replace scene with summary. Description, also, is sometimes a matter of telling instead of showing, although the best descriptions combine the two. Exposition is almost always “telling” but can be used by an author to set the scene and the tone, and also sometimes takes the form of authorial intrusion—comments made by the author aimed at the reader. Finally, “telling” sometimes IS showing, for example when it reveals a characters state of mind.

So the old rule that we’ve heard a million times—Show, Don’t Tell—is wrong. As Grace Paley told me when I took a workshop with her several years ago, the real rule is Show AND Tell.

I have to mention here the article Colson Whitehead write in The New York Times last week: “How to Write.” It was funny and strange (He recommends having adventures: ” “Rustle up some dysentery; it’s worth it for the fever dreams alone. Lose a kidney in a knife fight. You’ll be glad you did.”) The reason I bring it up here is that his Rule No. 1 is “Show and Tell.” But he must have gotten that from me (or possibly Grace Paley, which is where I got it.)

6 thoughts on “Tips for Writers: Show AND Tell”