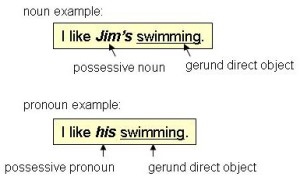 I’m currently working on revisions to my novel manuscript. I’ve been over the draft numerous times, so I’m not finding a lot of typos or grammar errors. My focus this time through, rather, is on style and continuity.

But I am spotting the occasional error, and I want to bring one of those to your attention.

I’m glad I caught the mistake. For a full discussion of the issue, check this out: Using the Possessive Case with Gerunds.