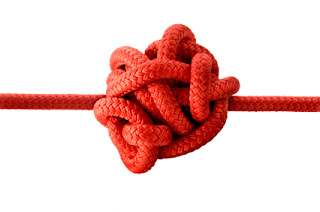 Let’s try to untangle a knot that some writers find themselves in: how to know when to use “which” and when to use “that.” The question arises today because of a story I’m editing.
The story, which consists mostly of one wonderfully long sentence, necessarily contains a lot of relative clauses in order to get from beginning to end. Both “which” and “that” are relative pronouns, so it’s no surprise that both appear frequently in this piece.
Using “which” when “that” is called for is a common error, but grasping the difference isn’t that hard.
Take a look at Chicago Manual of Style 5.202 (I’m using CMOS 15) on Word Usage:
That; which. These are both relative pronouns. In polished American prose, that is used restrictively to narrow a category or identify a particular item being talked about; which is used nonrestrictively—not to narrow a class or identify a particular item but to add something about an item already identified. Which should be used restrictively only when it is preceded by a preposition. Otherwise it is almost always preceded by a comma, a parenthesis, or a dash. In British English, writers and editors seldom observe the distinction between the words.
This is reasonably clear, I think. But Bryan Garner in Garner’s Modern American Usage, explains further.
The simplest statement of [the rule] is this: if you see a whichwithout a comma (or preposition) before it, nine times out of ten it needs to be a that. The one other time, it needs a comma. Your choice, then, is between comma-which and that. Use that whenever you can. . . A restrictive clause [using that] is essential to the grammatical and logical completeness of a sentence. A nonrestrictive clause [using which], by contrast, is so loosely connected with the essential meaning of the sentence that it could be omitted without changing the meaning.