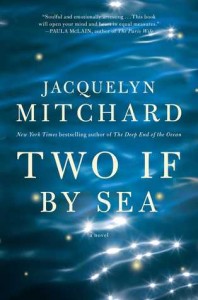 Two If by Sea

I read this book because the author is part of a panel I will moderate at the Virginia Festival of the Book called Life After Death: Hello from the Other Side. As the author said to me in an email, the book doesn’t quite fit with the theme (both of the other two books deal with reincarnation, or at least souls moving from one body to another). Still, the book begins with a terrible loss of life (which it shares with one of the other books) and features a young boy with inexplicable, supernatural abilities (which it shares with the other book), and so even though there is no reincarnation in this story, there’s definitely something paranormal going on.

We begin with a great tsunami devastating Brisbane, Australia on Christmas day. (It isn’t clear what year this is, but no connection is made to the Boxing Day Tsunami that killed so many people in Southeast Asia in 2004.) Included among the dead are Frank Mercy’s wife and unborn child. Despite his personal loss, Frank works to rescue others, including a young boy who is thrust into his arms. Despite the questionable legality of his actions, Frank takes the boy with him back home to Wisconsin, and on the way the boy’s remarkable abilities begin to emerge. And then it turns out that there are some “bad guys,” to use the boy’s terminology, who will stop at nothing to get control of the kid and his special powers.

It will be fun to hear the three authors on the panel talk about the thinks that link the books. Join us at 4pm on March 16 at Barnes & Noble in Charlottesville.