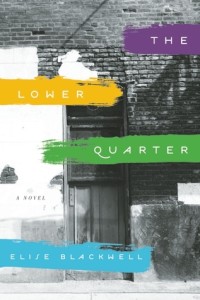 The Lower Quarter by Elise Blackwell

This book was originally part of one of the panels I’m moderating at the Virginia Festival of the Book next week called Pirates, Drones, and Other Catastrophes: Thrilling Fiction; unfortunately the author had to cancel her appearance, but I decided to read it anyway in case the audience asked about it.

The book is set in the immediate aftermath of Hurricane Katrina, but it dwells not at all on race or the political implications of relief efforts. Instead, it is focused more narrowly on one specific death–a murder–and the relatively small world of art collection and restoration. The story is told from four points of view: Eli, a former artist and thief hired to return a missing painting to its rightful owner; Johanna, an art restorer who is connected in some way to the deceased; Clay, the scion of an old New Orleans family who helped Johanna escape her former life in Europe; and Marion, a young bartender/massage therapist/painter/part-time dominatrix who accidentally becomes embroiled in the whole affair.

Despite the rather even mix of the points of view, one gets the feeling that this is really Johanna’s story. She is the one who is connected to the dead man and the missing painting, and she is the one who connects the other characters together.

There are basically three questions to be answered. Who is committed the murder? Where is the missing painting? And who is the “rightful owner” to whom Eli is supposed to return the painting. Three mysteries in one, which was more than enough for me to keep reading.