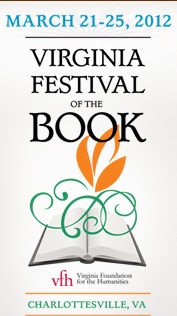 Friday was a busy day, so I’m only just now getting around to writing about Day 3 of the Virginia Festival of the Book.

I met about 25 writers for lunch at Bashir’s Taverna, which was fun–lots of people I knew and some I did not. Then I headed over to the Library for a panel sponsored by WriterHouse: Readers and Social Media: New Ways to Communicate. I had heard much of what was said, but I learned that maybe I need to look into Pinterest. I’ve been resisting.

I stayed on at the Library for another WriterHouse panel, this one on Retelling the Tales–three novels that are retellings or reimaginings of familiar stories. The panel featured Margot Livesy, Sharyn McCrumb, and Hillary Jordan.

And then I had to run out to the Barnes & Noble for the panel I was moderating: Reconstructions (“novels of war, man-made destruction, and their aftermaths”) featuring Casey Clabough, Taylor Polites, and Joe Samuel Starnes. I thought the panel went really well. All three authors presented their work clearly and read relatively brief sections, and then did a great job of answering questions–mostly posed by me, since I’d read their books.

By the time the panel was over I felt guilty about leaving the dog alone so long so I rushed home. Saturday is another day.