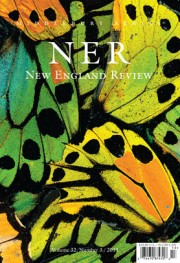 [This is the 6th installment in my Year of the LitMag Feature. If you are interested in writing about an issue of a literary magazine, please leave a comment or send me an email.]
There’s a lot to absorb in the latest issue of New England Review, Vol. 32, No. 3, including seven stories, several essays, and lots of poems. NER is one of my favorite literary magazines, and it shows up near the top of the rankings: #12 in Fiction, # 45 in Nonfiction, and #7 in Poetry.
Since I keep sending them short stories (no luck yet), I’m always curious about the stories they publish. There’s quite a range in this issue, but there might be some characteristics that tie them together.
Let me start with James Magruder’s “Matthew Aiken’s Vie Bohème” since Jim is a friend (we were Fellows at Sewanee together and recently had overlapping residencies at VCCA). This story, from his novel in stories, Let Me See It, due out in May, is set in 1981, when Matthew Aiken, a young gay man, is studying in Paris. He doesn’t get along with his host family, the amusing and emotional Sirjean family, or with his roommate, Bruce. But he does manage to meet a man at the Beaubourg, with unhappy (but amusing for the reader) results. Let me just say that I learned a new French word: la chtouille. Funny and sad, a terrific read.
I also really enjoyed Scott Southwick’s “Time Keeps on Slipping, etc.” in which time does, indeed, slip into the future, relentlessly. Nicky is in grade school and his babysitter tells him he has the most beautiful eyes. In high school he becomes a reporter for the student paper and his teacher remarks on his eyes. His father out of the picture, Nicky is on his own when his mother dies suddenly, and the future is now. Fast forward . . . “Brad Pitt played him in the movie version.” Nicky’s life has its ups and downs and we get them all in this quirky story.
“Confession, with Wolves” by Carol Keeley is a monologue, a wife speaking to her husband about their marriage. As with most monologues, this one is about the voice, in this case an unreliable narrator confessing to her husband about her . . . transgressions. And, in the process, the present circumstances are revealed. It’s an interesting technique, the monologue, and this is a good one.
“Manga Dolls on Skype” by Sandra Leong was fun, but I was rooting for it to turn out differently. Michael Coffey’s “I Thought You Were Dale” was funny, although it felt like there was an inside joke I was missing. (Also it’s an odd structure—all sections and no paragraphs.) While most of the stories are funny, “Keeping an Eye on Jakobson” by Anne Raeff is not. It’s a straightforward dramatic story about, among other things, the sorrows of war.
And there’s more, including poems by both the Director and the Assistant Director of the Bread Loaf Writers’ Conference, Michael Collier and Jennifer Grotz, which, like the New England Review, is also connected to Middlebury College. There’s a poem by Chelsea Rathburn, a friend from Sewanee. And there are several notable essays, including one by Michael Milburn about his brother Frank: “My Brother, the Writer.” I especially enjoyed this because we published an essay by Milburn in Prime Number Magazine recently: “My Memoir.”
It’s an excellent issue from a wonderful magazine.