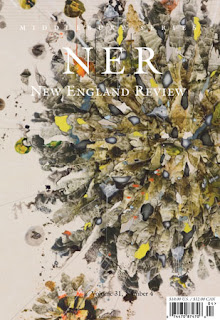 New England Review has long been one of my favorite magazines. My story of the day is “Man on the Run” by Kathleen Ford, in the current issue, Volume 31, No. 4.

The story reminds me of another story I’ve read in the past couple of years, the name of which escapes me. That story also involved older siblings living together, increasingly unable to care for themselves. Certainly the ending of this story distinguishes it, however, and despite the slight familiarity I liked the story very much.

Rosemary and Betty are elderly sisters who live together in upstate New York. They come from a large Irish family and seem to have outlived many of their relatives, including Rosemary’s beautiful daughter Moira, killed in a car accident 50 years ago, an accident for which Rosemary still blames herself.

On this occasion, though, the sisters have taken in their great-niece Linda, the victim of domestic abuse. Linda, like Moira, has beautiful hair, and Rosemary, although she can’t really manage stairs any longer, makes the difficult climb in order to watch Linda while she sleeps. When Linda comes down for breakfast, Rosemary observes the extent of the beating she has taken, and imagines what more damage might be hidden by the girl’s robe. Along the way, we learn that it’s difficult for the sisters to get out. There used to be a student occupying a nearby apartment to did chores for them, but he’s moved on and they haven’t found a replacement. While the exterior of the house is taken care of–preserving their investment–the interior is falling apart: cracks in the plaster, peeling wallpaper. We also learn that there isn’t money to do much more.

The arrival of Linda also brings to mind–for Rosemary, at least, although Betty was too young at the time–another “man on the run” their family took in back in 1919, a leader of the Easter Rising of 1916, in Ireland.

And then the abusive boyfriend shows up, discovering Linda’s location through the carelessness of her sister. Confrontation ensues.

Although I liked the story a lot, I don’t know that it does enough with the reference to the earlier fugitive the McGuire family harbored. And in the climax of the story, where Tommy, the boyfriend, confronts Linda and the sisters, a gun goes off. I won’t say what happens, but I do have a question. If it is true, as we’ve learned from Chekhov, that a gun hanging over the mantel in the first act must be fired in the last act, isn’t it also true that if a gun is fired in the last act it must be hanging over the mantel in the first? That is, isn’t it too convenient that the gun shows up in the end? (It isn’t Tommy’s.) Or perhaps–and this seems both plausible and reasonable–the author realized that if readers saw a gun early in the story we’d fully expect it to be fired in the end. (I know I would.) So, in fact, Ford may just be working counter to expectations, which is probably a good thing.

These are small quarrels. It’s a very good story.