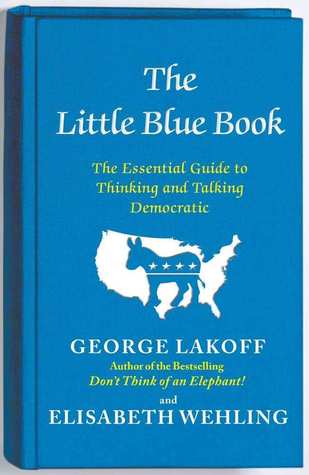 The Little Blue Book: The Essential Guide to Thinking and Talking Democratic by George Lakoff and Elisabeth Wehling

There’s no question that words matter, and this book–like Lakoff’s previous one–addresses that point but also expands that notion to look at the idea of framing and the conceptual metaphors we use. How issues are framed is just as important as the words we use to talk about them. For the most part, Lakoff and Wehling say, Democrats have gotten it all wrong and have let Republicans control the debate. The solution, which will take a long time, is stop using their frames and their language.

The argument suggests that a lot of people aren’t smart enough to see through the Republican spin. Lakoff could be right about that.

From the preface: “Our major point is simple. Messaging is about thinking, not just language. To get language right, you have to understand the thought it conjures up.”

The authors say, for example, that Democrats made a mistake by accepting the healthcare as product metaphor in the debate over the healthcare law. That framing has lead to weaknesses in convincing the public that it’s a good law.

In general, it’s a good book. Democrats should read it.