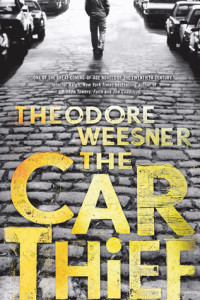 The Car Thief, republished as an eBook in 2012 by Astor & Blue and now available in paperback also, was Theodore Weesner’s first novel, originally published by Random House in 1972. Weesner, a graduate of the Iowa Writers Workshop, went on to publish several more novels and a collection of short stories and is said to be, though nearing 80, working on a memoir and a new novel.

The book tells the story of young Alex Housman, in 1959, in Detroit, a sixteen-year-old car thief. He is driven to steal—but not to steal, exactly, Alex is a joy-rider—out of boredom. He lives with his alcoholic father, has memories of being abandoned by his mother and separated from his younger brother, is ashamed of the squalor in which he now lives. He’s a smart kid, but doesn’t apply himself in school. But, of course, getting caught is the best thing that could happen to him, and after a stay in a juvenile detention center he’s on his way to rehabilitation. He’s seen what the future can be, and he wants no part of it. It’s a fragile recovery, though, with pitfalls and setbacks. The great tension of the novel is the reader’s fear that Alex will make a mistake and backslide, and his journey unfolds against the drama of life in his dysfunctional family.

It’s a coming-of-age story, one that is based closely on Weesner’s own life. The biographical note on the author tells us that his home life was similar to Alex’s and, like Alex, he was charged with car theft as a teen. The coming-of-age genre refuses, unfortunately, to go away, and so it’s hard to imagine that readers today will care much about Alex and his 1959 problems. We’ve got more than enough contemporary coming-of-age stories as it is, and way bigger problems.

Still, it’s a compelling read. Alex is a troubled kid, and if we don’t exactly like him, it’s not hard to sympathize. If he doesn’t behave well toward girls—and he doesn’t—he hasn’t had very good role models. His father is a drunk and his mother disappeared years earlier, resurfacing only long enough to take her younger son away. And if he doesn’t make very good choices, it’s because he gets no guidance. Alex is left to fend for himself most of the time—cooking, laundry, house cleaning—and school doesn’t interest him at all.

Fortunately, though, after his arrest, he is aided by two men who understand where he’s coming from. Without them, Alex’s life would take one tragic turn after another. That, maybe, is the message here. You can’t expect a kid to grow up and get it right without someone showing the way. In this case, it’s Mr. Kelly, who runs the juvenile detention center, and Mr. Quinn, his probation officer and counselor. From them he gets discipline and advice. In them he sees men who have come from similar backgrounds who have risen above their youthful mistakes. He sees that he doesn’t have to end up like his father.

We can’t expect kids to figure everything out by themselves, the book appears to be saying. We have to show them the way.