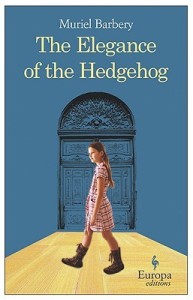 The Elegance of the Hedgehog by Muriel Barbery

I’m not sure what to think of this book. On the one hand, I recognize that much of the writing is inspired, if not brilliant. I admire its explorations of class and philosophy and art and language. On the other hand, its two narrators are among the most annoying in all of literature, one for her self-righteous snobbery (toward the upper classes she knows are inferior to her) and the other for her intolerable precociousness. They both grow on you, but not if you throw the book across the room first.

Renée Michel is the long-suffering concierge of a Parisian apartment building occupied by the rich and powerful. Paloma Josse is the young daughter of one of those occupants. Renée grew up poor and has never had the luxury of school, but is an autodidact with eclectic tastes in art, music, cinema, literature, etc. Perversely, though, she feels she must hide her considerable intelligence from the residents of the building, who would not be able to handle the contradiction of a smart concierge. Then there is Paloma, who also thinks she’s too smart for her own good and plots her suicide as a way of punishing all those around her. Eventually, they discover each other (it is Paloma who thinks of the concierge as being solitary and deceptive, with the elegance of the hedgehog) and also come under the influence of a new resident, the wealthy Mr. Ozu. To go much further would be to spoil the plot, so I’ll leave it at that.

I will say, though, that I was not satisfied with the book’s ending. Ending a book is not easy, I realize, and it’s hard to imagine an ending here that would be satisfying. Or maybe the experience of coming to the end of the book is too fresh in my mind to fully appreciate. I might need to think about it more.

In any event, I’m very glad I read this book. (And by read, I mean that I listened to the audiobook—very ably performed—and also skimmed the text, which was helpful to be able to visualize the French names throughout.)