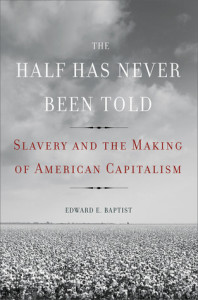 The Half Has Never Been Told: Slavery and the Making of American Capitalism by Edward E. Baptist

This is the book we’re discussing this month at Reading Liberally. The book is filled with remarkable detail about the economics of slavery and the industrial growth of America. So much detail that the book feels too academic for the typical reader. I found myself longing for an executive summary. A twenty-page precis would have been fine to make the point, I think. Still, the detail makes it all the more compelling.

Most of us already know (despite some modern denials) that slavery was evil. Despicable, unconscionable, usually brutal, and wrong. Many of our country’s early leaders were slave-owners even while professing opposition to the practice. Those who truly did oppose slavery lacked the political strength to do anything about it until Abraham Lincoln came along, more than eighty years after the country came into being. Slavery was an underlying theme of many of the largest political clashes our young country faced.

And anyone who doubts that the Civil War was fought over the issue of slavery should be forced to read this book.