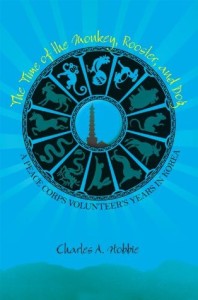 Forty years ago today, on January 5, 1976, I traveled from my parents’ home in Indianapolis to San Francisco to join the “staging” for my Peace Corps service. My group of new volunteers, which became known as K-37 (the 37th group to serve in Korea), would spend a few days there for last-minute evaluations, inoculations, and pre-service orientation, before flying to Korea to begin our intensive in-country training.

So it is more than fitting that today I am writing about Charles A. Hobbie’s memoir, The Time of the Monkey, Rooster, and Dog:A Peace Corps Volunteer’s Years in Korea. Chuck, as Hobbie is known to just about everyone associated with Peace Corps Korea in those days (he served as the Korea Desk Officer at Peace Corps when I was a volunteer), was a member of K-8 (or K-VIII, as it was labeled at the time), which arrived in Korea in 1969, more than six years before my group landed. But because his job (University English Education) was the same as mine, although in a different part of the country, I was fascinated by the book.

For one thing, the level of detail is remarkable. Chuck says he had access to many of the letters he wrote home from that time, so that explains a lot of it. I really regret that I could never come up with the same detailed account of my own experience. I didn’t keep a journal (or, rather, I did keep a spotty one, and even that disappeared long ago), I didn’t write home all that much, and I don’t know what might have happened to the letters I did write. So if I were to attempt a book like this, it would all be dependent on my faulty memory and fertile imagination (which is why I am a fiction writer).

So the great details allow me to relive my own experience to some extent. But I’m also fascinated by what was different about our years of service. Chuck’s group had four months of training, most of it in Hawaii, which meant that they already had a pretty good grounding in the Korean language before they ever saw Seoul. They had also bonded with each other. Our group also did some bonding, beginning in San Francisco and then during our in-country training in the city of Cheongju, but when we landed in Seoul we only knew a couple of words of Korean, and we were only beginning to get to know each other. Then, too, we only had two months of training, which meant for me that my level of Korean wasn’t as high as I would have liked when I finally landed in my assigned city of Jeonju. And Daegu (which I visited several times as a volunteer) was a much larger city than Jeonju, so the diversions available to us were somewhat different.

But so much of what Chuck writes about in this book is a shared experience. Learning how to get around the country on buses and trains, learning to love the food and the various kinds of local alcohol, learning to enjoy the people, my students, my colleagues, and my environment, finding productive ways to spend time during school vacations. It seems clear that for Chuck the first year of service was pretty difficult–that was also my experience–but the second year flew by too fast. Like Chuck, I also doubted whether I was really doing anyone any good by being there. And like Chuck, my subsequent career was drastically changed by the experience. And so on. It all seems so familiar.

Even our vacations were somewhat similar. Between my two years of service I traveled with a couple of other PCVs to Japan, covering much of the same territory Chuck did at the conclusion of his time in Korea. But after my two years, I spent several months traveling through Southeast Asia, a trip that Chuck took after his first year. (I envy his trip on the Trans-Siberian Railway, something I’ve always wanted to do.)

For anyone who has been a Peace Corps Volunteer in Korea (or anywhere else, I would imagine), this book will bring back lots of memories, probably good and bad both. I thoroughly enjoyed it. I can’t believe I began that journey so long ago.