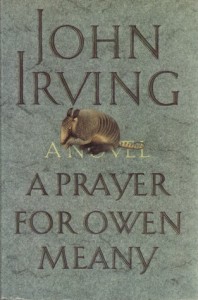 A Prayer for Owen Meany: A Novel

I can’t believe it took me this long to get to this novel. I enjoyed a few other of Irving’s earlier books, but my impression has been that his later work was long, over-written, and in need of editing. So I stopped reading him, even other examples of his earlier work.

But recently I acquired an audio version of this novel and decided to give it a try, and since I also had a hardcover copy (purchased used, I would guess, based on the bookmark), I supplemented my listening with some actual reading. And I have to say that I think this novel is a spectacular achievement. Beautifully written, enchantingly plotted, and deeply layered, this is now one of my all-time favorite novels.

Everyone else has already read it, so you know the story. John Wheelwright and Owen Meany grow up together in Gravesend, New Hampshire. The boys are very different, but their fates are intertwined as they pass through the tumultuous ’60s. The story is told from John’s first person point of view looking back from his perspective in 1987 during the height of Ronald Reagan’s Iran-Contra scandal. John is outraged, but it brings back to him the even greater outrage of the Vietnam War.

Owen Meany is one of the most memorable characters in modern literature, I would argue. Short of stature and with a high, grating voice, he believes himself to be, from a very young age, an instrument of God. How that manifests itself–and it does–figures importantly in John’s own spiritual journey. The high voice is a particularly nifty device. On the page, Owen’s voice is rendered in all caps (which Irving knows will be annoying to readers). In high school, where Owen is a columnist for the school paper, his articles are also rendered in all caps, which is a nice touch. As I said, though, I listened to the audio version of the book, narrated by Joe Barrett, and in that version the voice is a grating falsetto. The listener grows accustomed to it, and when I think of Owen Meany I will always remember that voice.

I don’t, usually, like religious books, and this one isn’t exactly trying to convert me. But it certainly is about Owen’s beliefs and about John’s changing beliefs.

An amazing book. Irving is a genius.