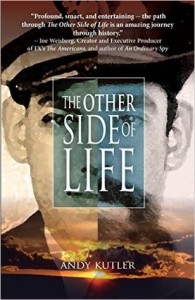 The Other Side of Life

I might not have come across this novel except that I’ve been asked to moderate a panel at the Virginia Festival of the Book in March called Life After Death–Hello From the Other Side, which I assumed meant that the three novels to be discussed were about reincarnation.

This is the first of the three I’ve read, and it’s not exactly reincarnation that’s going on here. It’s way more complicated than that, and as it turns out makes for an excellent story.

Lieutenant Commander Mac Kelsey serves on the USS Nevada at Pearl Harbor and thanks to his quick thinking saves his ship when the Japanese attack. Many of his men are killed, however, and he is also severely wounded, perhaps mortally. Because of a personal tragedy, he actually welcomes death, but instead, he finds himself boarding a train. He assumes this is the train to heaven, or wherever he’s bound, and the reader thinks he’s probably right about that.

But he’s not, at least not quite. He meets Sam Leavitt, his Guide, who makes him an offer, which is to begin a new life somewhere else. With little to lose, Kelsey accepts the offer and finds himself in New Mexico, attached to the US Army, just as the Civil War is about to break out in 1861.

And that’s about all I can say without giving too much away about this very enjoyable novel. Kelsey is an intriguing, flawed central character, but his is not the only narrative voice the author uses to tell this story, and the book is populated by several engaging, fully-realized men and women. The military details (both at Pearl Harbor and in the Civil War scenes) seem spot on (or at least completely credible), the action is fast-paced and dramatic, and the dialogue is excellent.

And then there’s this Sam Leavitt character and the Guides, who are sort of, but not quite, angels. How do they fit into this war story, and what do they have in mind for Lieutenant Commander Kelsey? That’s a very good question, one that for this reader was most satisfactorily answered by the book’s resolution.