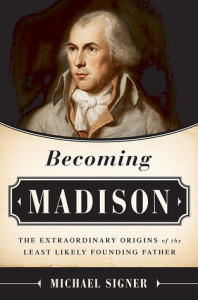 This book is the March 2016 selection of my book club, Reading Liberally, chosen in part because I’ve met the author (currently the mayor of Charlottesville, VA) on several occasions. We also chose the book because we are fans of Madison after reading some years ago a terrific book, Founding Faith, by Steven Waldman, in which Madison was portrayed as the hero of Religious Freedom. Plus, we’re not that far from Montpelier, Madison’s home, so we all wanted to know more about him.

Signer’s book is excellent and readable, taking us from Madison’s childhood and early education, through the influential Princeton years, followed by his struggle to find a profession and to define his personal philosophy. We see his health struggles and the pressures of both service and family. Two things in his story really stood out. First, the book deals extensively with Madison’s decades-long conflict with Patrick Henry, an anti-Federalist. Second, much of Madison’s life was dedicated to persuading the States to ratify the constitution, especially in Virginia. The stories of both of these aspects of his life were fascinating.

Along the way we also learn about his relationship with his teachers–John Witherspoon of Princeton was a particular influence on him–and friends, including Alexander Hamilton, Thomas Jefferson, and others.

It’s a fascinating book, highly recommended to lovers of history.