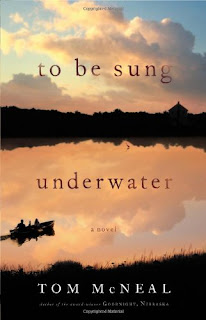 To Be Sung Underwater

Tom McNeal
Little Brown, 2011
I couldn’t put it down. Seriously. I’ve never resorted to that cliché before, I don’t think, but in this case it’s true. I’m traveling abroad right now and brought the book with me. I began it on the plane, continued reading in the airport lounge during a layover, and kept at it in my French hotel despite being seriously exhausted. But I needed to know what became of these people, Judith and Willy.
The book begins with a brief, unnecessary prologue. But after that it’s flawless. Judith Toomey Whitman, a film editor in L.A., finds that her life has “swerved” for no reason that she can identify. But it’s not that hard to understand, really: she’s forced to get rid of something that’s meaningful to her, and the act of doing so brings back intense memories of her teenage years and her first love, Willy Blunt. Because her marriage of long standing seems to have hit a rough spot, she’s vulnerable to the feelings that these memories resurrect, and so it’s also not surprising that she embarks on a quest to find out what happened to Willy. From a novelist’s point of view, the cause of Judith’s “swerve” is the same catalyst that sets this book in motion, and keeps the plot stirring for over 400 pages.
Although a compelling read, it’s quiet and lyrical. It’s also one for which place is enormously important. While Judith now lives in L.A., as a girl she lived with her father in a small town in Nebraska, and Willy, who was her first boyfriend, introduced her to that landscape in a way her father could not. When she left Willy and moved to California for college, she’s abandoned this landscape and gotten as far away from it as possible. But because of the feelings for the land that Willy instilled in her, it’s inevitable that she returns. (Perhaps that Prologue is there for that reason–to give the reader a glimpse of that return.)
Structurally, the book is complex. In the first paragraph we learn that Judith has survived this “swerve” that her life has taken, so there is the sense that the narrator is looking back at the events of the novel with a little distance. But Judith herself is reliving the events of her teenage years, and the narrative shifts back and forth between the present and the past in Part One, settles entirely into the past for Part Two, and jumps to the convergence of past and present for Part Three. The characters are wonderfully complex, as well. Judith, who in her work enjoys the subtle manipulation of time that is possible in film, also views her own life as a movie, and identifies as she’s living it scenes that will comprise her movie. She’s smart, but she’s not a great mother to her daughter Camille, probably because her own mother wasn’t part of her teen years. And when her life “swerves,” her work declines, and so does her home life. Willy is flawed, too. We see him mostly as a teenager, one who is diligent and honest, with great imagination and romantic flair, but with a temper and limited ambition, at least until he understands the seriousness of his relationship with Judith. There are other great characters in the book, too, although we don’t see any others in such depth. Judith’s father, a college professor, is charming, but harbors secrets. Her mother, as she ages, seems to regress, abandoning inhibitions in a way that Judith finds embarrassing. Malcolm, Judith’s husband, isn’t quite as well-rounded as the others, but he, too, can be charming, and incredibly patient.
One other aspect of the book that’s notable is its heavy use of allusion to literature, film, and song. Judith, the daughter of a literature teacher, has read a great deal, and the heroines of many of the books she’s read present themselves to her as life lessons. Of course Judith is in the movie business, and as a girl living with her father saw many movies with him. And songs—one particular song that is a mystery for most of the book—also play an important role, even contributing the book’s title.
In the end, the reader has the sense that Judith has it all wrong about her life’s “swerve.” That really happened years ago when she left Willy behind to go to Stanford, a place where he had no chance of fitting in—that’s when the movie of her life went off the rails. And what keeps the reader going is the hope that the latest “swerve” is going to bring her back to Nebraska and Willy.
Read this one. I’m sure you’ll like it. I’m now a Tom McNeal fan and will be looking for his other novels.