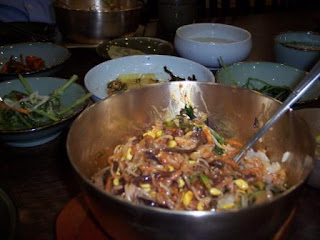 On Tuesday morning I set off for Jeonju, North Jolla Province, with a guide. I probably didn’t need a guide, but Mr. Hong did make things easier, especially since he drove, so there was no hassle with public transportation. Unfortunately, the monsoon season kicked in with a vengeance, so the trip wasn’t exactly scenic.

Nonetheless, we arrived in Jeonju–the city where I spent 2 years teaching English in the 70s–around lunch time and set off in search of bibimbap, the dish for which the city is famous. We found a place that was recommended, and I thought it was pretty good. 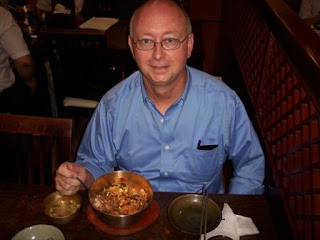 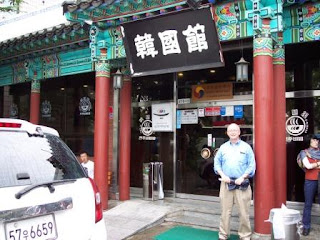 And here I am standing in front of the restaurant. 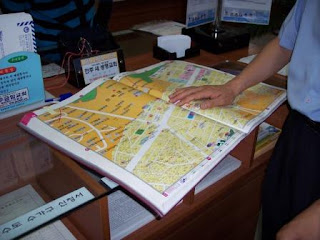 Then we wanted to find the neighborhood where I used to live. I kept saying that it was 35 years ago and i doubted that we’d find the neighborhood, much less the house, but Mr. Hong insisted. But nothing looked right, and I only had a vague idea of what my “address” was back then (and addresses were pretty vague to begin with–I didn’t have a street). Eventually we stopped at the district office and the people there tried to help, but they didn’t believe me when I said the main street that cut through town didn’t even exist back then. Here’s the office where we studied the local map. 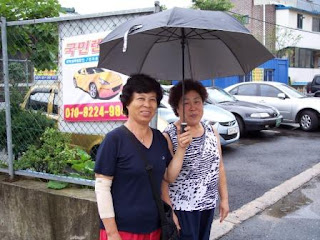 Although I was ready to give up, Mr. Hong drove around some more, but I’m sure that urban renewal took my house. But we talked to these very nice ladies about the old days, and so I do think we were in the right general vicinity. 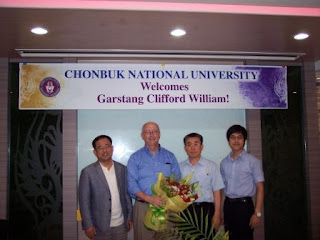 It was then time for our appointment at the university, where we met with the dean of the international affairs office. We had a nice talk and I was interviewed by a reporter from the school newspaper. We also had a campus tour, even though there’s really nothing left from the old days. Chonbuk University now has 30,000 students–maybe about 6 times the number it had back in the 70s. 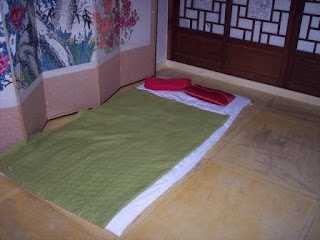 Then, in the very heavy rain, we located the place where I was to stay–a room in a traditional-style house in Jeonju’s Hanok Village. Back in the 70s, everything was traditional, so this sort of place didn’t exist, or rather it wasn’t special. This was fun as a reminder of the old days, although sleeping on a mat on the floor I could probably have done without. Some more pictures below: