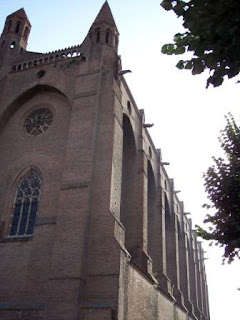 I’m seeking refuge in my air-conditioned hotel room until the temperatures drop a couple of degrees. 102 is just to hot to be wandering around a city, even a fascinating ancient city like Toulouse. But I was out there most of the day, so I thought I’d use this cooling down time to share some of it. 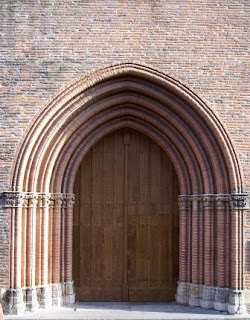 My first stop was the Jacobins church and cloister (although I didn’t go into the cloister), built by Saint Dominique in the 13th Century–making it the mother church of the Dominican order. St. Thomas Aquinas is entombed there–he was the head of the order and died in 1274. 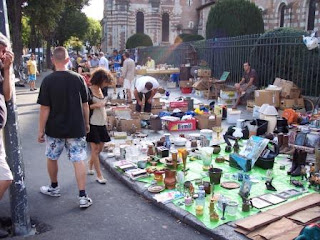 I then went back to the Basilica I visited yesterday in order to check out the Saturday morning flea market. There are vendors scattered all around the road that circles the Basilica, selling all kinds of junk. Lots of bargain hunters, but I didn’t see anything I wanted! 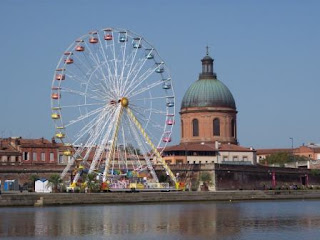 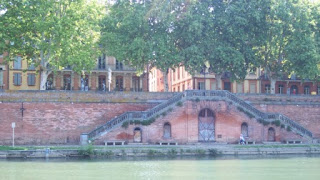 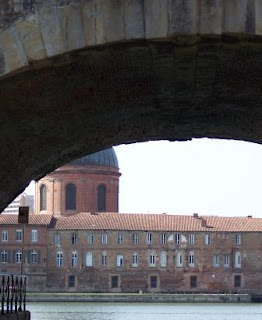 A boat tour was recommended, so my next stop was the dock. Although I sat in the sun on the boat, the breeze on the river was pleasant, and it was nice to be sitting while sight seeing for a change! Toulouse is situated on the Garonne River and is also served by a canal (the Canal du Midi) that is part of a series that links Toulouse to the Mediterranean (whereas the Garonne flows to the Atlantic Ocean. By passing through a lock, we entered a connecting canal, and then also went downriver for a while, and saw some interesting things along the way.

On the way back to the hotel for a break I stopped in an English-language bookshop. Not that I need any books on this trip, but the prices alone would have stopped me!

After lunch and a short rest, I hit the road again, this time aiming for the Augustins museum, specifically to see the Toulouse Lautrec paintings they have. But when I got there, a sign was posted that said because of the heat, the rooms with the paintings were closed this afternoon. I don’t blame them, of course, but it was a disappointment. I’ll try again in the morning. So then, melting a little myself at this point, I wandered around some more. I found the Cathedral St. Etienne, which is another ancient church, this one built in a hodge podge of styles.

More wandering through narrow streets, passing ancient mansions–this one from the 17th Century, the next from the 16th–and eventually worked my way back close to the hotel, where I acquired some ice cream to eat in the park. But it was just too hot, and so here I am! It’s after 6pm now, and I’m hopeful that things have cooled off a degree or two . . .