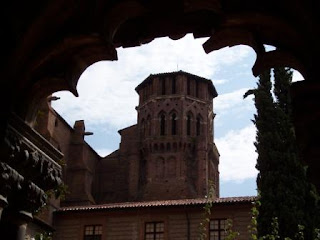 I’m not planning to post every day during my stay in France–starting tomorrow, I’m here to work–but I’ve been a tourist in Toulouse and I’m pleased to be able to share pictures and impressions. Although it would eventually get hot, at 9am this morning when I headed out, the air was nice and fresh. Since it was Sunday morning, not many people were around, and few shops were open. There was a stand on the Capitole square selling bread that looked fantastic, but I’d just had breakfast so I passed it by (until later, on my way back for a rest, when I got a baguette). I just walked around the old quarter and along the Garonne until 10 when the Musee des Augustins opened. 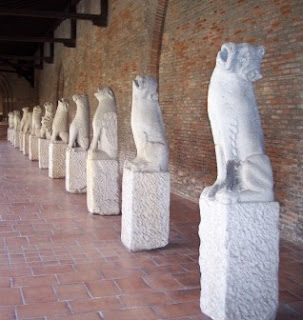 What a terrific place! First, it’s a beautiful old monastery, so it’s a work of art in its own right. It reminded me somewhat of the Ex-Convento de la Natividad in Tepoztlan, Mexico, although that’s not quite the same sort of museum and hasn’t been as well preserved. This Musee, though, has a great collection of statues from the Middle Ages as well as regional painting from the 19th Century (and earlier), including several pieces by local favorite son Henri de Toulouse-Lautrec (from nearby Albi).

There’s also a nice courtyard veggie and herb garden, I suppose because the monks needed to feed themselves? (These pictured gargoyles are keeping watch over the garden.) 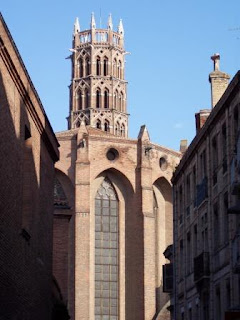 On my stroll, I caught another glimpse of Jacobins down a side street. Still quite an impressive sight.

Also in the morning, I visited the Musee St. Raymond near the Basilica. It’s interesting in that it shows the history of Toulouse from very early times (Toulouse was the capital of the Visigoths!) but I didn’t want to take the time to decipher too much of the French, and there wasn’t much English. 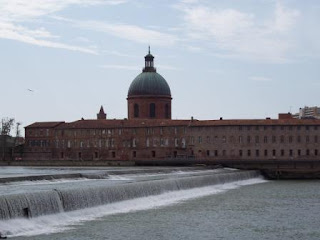 Back along the Garonne, I decided I’d stop by L’ Espace EDF Bazacle, an old hydropower station turned exhibit on water and energy. I wouldn’t have paid to go in, but since it was free . . . I especially enjoyed the close-up views of the river.

And at that point I’d seen everything in Toulouse I wanted to see–and then some. I kept walking, though, as there is always something popping up when you turn a corner of one of the narrow alleys–the open markets, the vendors, the cafes.

In the morning I’ll need to make my way to the train station to get on the Bordeaux-bound line for my stop at Valence d’Agen, where, if all goes well, I’ll be picked up by VCCA staff for transport to the facility in Auvillar. It will take a while to get settled there, I imagine, but I’m not there for terribly long–I have to leave on Sept. 1–so I need to get to work!