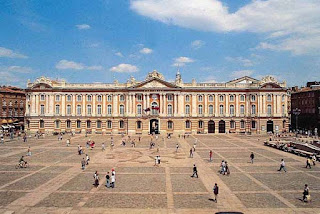 Although the flight to Europe isn’t quite as daunting as the trans-Pacific trips I’m accustomed to, with connections and layovers and unfamiliar airports and shuttle buses and new cities, it was an exhausting trip.

Departure from tiny SHD (Shenandoah Valley Regional Airport) was as easy as ever, and the wait at Dulles for the flight to Frankfurt wasn’t too long. There were lots of children on that flight, though, so I didn’t get much sleep during the 7 hours. I did read a fair amount of the Tom McNeal novel I’m doing a review of (I nearly finished it last night, jet lag and all, and then when I got up early this morning I did finish). It had been a very long time since I’d passed through Frankfurt–probably on my last trip home from Almaty, in 1995–so I wasn’t sure what to do. But Germany is nothing if not efficient, so I followed the signs, went through passport control, came back through security, and made the long trip out to the gates and the Lufthansa lounge, where I had several hours to wait for the flight to Toulouse.

The lounge was nice, but crowded. I found a seat. Got some food–very nice for an airport lounge–and coffee, and settled in to figure out the WiFi, and then read. At one point after a couple of hours I looked up and saw a face I recognized. It took me awhile to come up with the name to connect to the face, and then I wasn’t sure. The guy was with a woman who also looked familiar. I heard her American accent, and then I was more confident. So I approached, and sure enough it was old friends from when I practiced law in Singapore (which ended in 1993). Although I’d exchanged an email with them once when I was at the World Bank–by then he was in London with EBRD–we hadn’t seen each other for 18 years or so. Since they are now living in DC and were on their way to Austria on vacation, it was an amazing coincidence to run into them in Frankfurt, and it was great to catch up.

Eventually, I had to find my gate and board the flight, a short regional trip, just an hour and a half. While I read my book and looked out at the passing scenery, the American woman sitting behind me read to her daughter from a Harry Potter book. Couldn’t tell you which one. The Toulouse airport seemed deserted. There was a passport control booth, but I suppose because this was an internal EU flight there was no one checking on us, and no one at customs either. It all seems very lax–and my suitcase was never subjected to customs at all since it didn’t technically go through customs in Germany either. Outside there were few directional signs, but I eventually saw one that said “Bus.” I was tempted to do the taxi thing since I was so tired, but the idea of saving a lot of money appealed to me–I got a terrible exchange rate in the Frankfurt airport, and I was feeling a little robbed–so I kept following the signs. Eventually I found the booth for buying bus tickets, bought one for €5, and waited about 10 minutes for the bus to come by. I got off at the station I thought was closest to my hotel–I was wrong, it seems–and eventually figured out the map and located the Hotel Albert 1er.

The room is nice enough. Small. Nice shower. No view. Free wifi. I showered, crashed for a while, and then went out in search of food. I walked around a bit to get a sense of the downtown area, picked up a sandwich, found a shop selling wine, and came back to the room to settle in and read. The book was so good that I stayed up much later than I had planned–a very good thing.

But then I was up way early, so I finished the book and did email until it seemed like a good time to go down to breakfast. I was the only one in the breakfast room and I took full advantage of the spread!

Today it’s off to explore Toulouse, although it’s going to be a hot day. The picture above, purloined from the internet, is the Capitole, right in the center of the city, and that’s where I’ll start this morning.