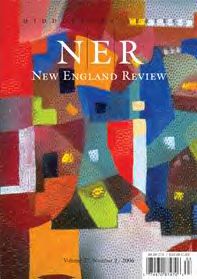 Volume 27 No. 3 of New England Review is loaded, as usual.

The first short story in the issue, “Take It from Me” by Rick Canning, starts strong. Robert Bartlett is at a bar, his corner dive, waiting for his brother. In the meantime he laments the loss of his ex-wife, Karen, a fiction writer who has published a thinly-veiled account of their marriage, his daughter whom he sees every other weekend, and his favorite bartender. The brother, Brian, is late, which gives Robert a chance to remember his brother as a deadbeat and a failure, but the ending suggests that Robert’s memory might not be reliable.

Lauren Acampora’s “How Deep is the Ocean?” is a disturbing story of a couple whose baby is born with a genetic anomaly that will render her completely blind by the age of three (“born with blank eyes, nearly transparent with almost no pigment”). Instead of allowing her to experience sight and then suffer the tragedy of losing it, they blindfold her from the very beginning. The horror of the story is how reasonable their decision is made to seem, and the years unfold until the time when they can finally remove the blindfold. Very disturbing and beautifully done.

“What I Never Said” by Elmo Lum is also disturbing. Unlike Acompora’s piece, this one is filled with dialogue, mostly a bickering husband and wife who are traveling through the desert in an overheating van with their three sons and a dog. The wife won’t eat, she won’t sleep in the tent . . . Since the story is online I’ll leave it at that, but it is definitely worth reading.

The last short story in the issue is “The Remotes” by Marshall Boswell. The story is about Julian and Abby and their modern lives that are about to be turned upside down by Abby’s latest pregnancy. It’s a good story, but the main reason I mention it is that the author’s website reveals that he’s working on a novel set in Washington DC and the Shenandoah Valley (he went to Washington & Lee University in Lexington) and I’m looking forward to that—it’s usually fun to read fiction set in places that are familiar.

I’ll mention just three poems in this issue: “The Rescue” by Alison Stine and “Horse Madness” by David Baker (both of which are online) and “Mexico, 1910” by Xochiquetzal Candelaria, which she read last month at Bread Loaf.

And there’s lots more besides!