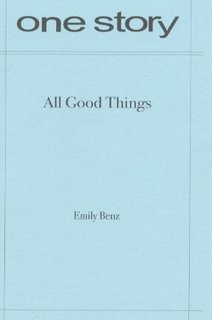 “All Good Things” by Emily Benz in Issue Number 78 of One Story—is this a long short story? Or a really short novel? In that it covers a long span of time—about 20 years, and not through flashback, but in a present tense chronological narrative—it confidently defies the convention that a short story should focus on a single moment. (There are lots of fine counter-examples, including Annie Proulx’s “Brokeback Mountain” so the convention obviously is not a hard and fast rule.) It begins when the narrator is seven, enjoying a cabin on the shores of Lake Superior, a family tradition that continues every summer. During the course of the story, there are conflicts within the family, and one senses, not only from the title but from the rising tension, that the tradition is doomed.

“Uncle Bruce and Uncle Ralph begin screaming at one another near the smoldering ash, blaming each other’s carelessness, blaming each other’s children. John wanders towards the beach, disinterested, but Lee stares at the men, their twisted and tired faces. She watches them accuse each other, their voices choked with contempt. Their hard anger confuses her. They have been drinking, but they often drink, and she has never seen them fight like this. Uncle Bruce forcefully points his finger into his brother’s chest until her grandfather steps in, speaking firmly. The men quiet like tired children, walking away from one another and muttering to themselves.”

And so it goes on as the narrator grows up and continues to return to the cabin each summer. The story resonated with me because my family rented a cabin on a Minnesota lake each summer, with some of the same tensions and inevitability. And surely it would resonate with anyone, since all families have traditions that persist but ultimately must fade away.

Next up: Gettysburg Review