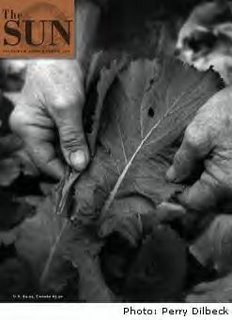 I have been a subscriber to The Sun for some time now, but I confess I don’t often read the magazine cover to cover, possibly because there is usually only one piece of fiction. I did manage to spend more time with the October 2006 issue, though, and it is so good that I’ll have to do a better job with The Sun in the future.

The month’s short story is “A Heart in Port” by Dawn Paul, which is a quiet story about a woman and her elderly mother going for a walk along the coast on an October day:

“I am the keeper of my mother’s stories now. I give them back to her on our weekly drives along Narragansett Bay, which is not Palermo, but is pretty in its own way, especially in autumn. The coast is more crowded now than when I was growing up here, but I imagine most seacoasts are: Tripoli, Havana, Cyprus, Panama, San Juan, Sicily. As I look at the familiar views of beach and marsh, I give my mother back her stories: Fierce, beautiful women in black head-scarves. The smell of flowers and garbage. My father’s fear of foreigners, how he never learned to accept their insistent kindness.”

One of the essays in this issue is “The Brahmic Egg” by Margot Singer (available as a pdf file at The Sun) about a miscarriage and subsequent pregnancy. Margot was in my workshop at Bread Loaf and brought a beautiful story about an Israeli family living in New York.

Possibly my favorite piece in this issue is “Blessed Meadows for Minor Poets” by Poe Ballantine, about struggling as a writer and finally getting a contract for a short story collection, only to be saddled with an editor who didn’t get him and tried too much to shape his work. (This after having a story selected for Best American Short Stories.) The project was a disaster, but it sounds like Ballantine has had his revenge.

Finally, “You’re in Prison” by John Purugganan is tough. The author killed a man while on crack and the essay is painful to read because it feels so honest and real. His siblings have cut off contact with him and he has lost touch with his children. He knows he is going to die alone in prison. Writing is the only legacy he has to offer and this is one time where I think the second person narrative makes sense: the writer has to distance himself from what he has done. How could he not? For another take, see Jim Putnam’s Thoughts and Pontifications.