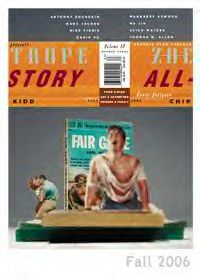 Zoetrope: All Story is an odd magazine, in part because of its emphasis on design. Sometimes, for me, the design of the magazine interferes with the enjoyment of the stories, which is almost certainly a bad thing in a literary journal. There’s a certain amount of this in the current issue, designed by Chip Kidd. It’s attractive, but with titles stretching across pages—several pages in some cases—it isn’t as reader-friendly as it could be. And while I’m complaining, let me say that the mixture of fiction and non-fiction here, without identification, is disorienting. I like to know what I’m reading, and since so many modern stories are faux-memoir, it is often hard to tell the difference.

One of the pieces I liked best in this issue is “Where I Come From A Hushpuppy is Not a Shoe,” by R.T. Smith, editor of Shenandoah. This is pretty clearly non-fiction, made me hungry, and I studied Smith’s recipe to see if making hushpuppies was a viable option for me. I concluded no, but I may need to seek them out the next time I go to a Southern restaurant.

Ha Jin’s “A Composer and His Parakeets” is excellent fiction about Fanlin, the composer, who watches his lover’s parakeet while the lover is away. Despite his initial resistance, the bird charms Fanlin and he is inspired to do his best work.

I also enjoyed “Our Lady of Paris,” by Daniyal Mueednuddin, in which the Yale-educated son of a Pakistani industrialist spends Christmas in Paris with his American girlfriend. With the man’s parents also in Paris, Helen, even though everyone is very proper and polite, feels a conflict growing with the family. Eventually, the man’s mother spells it out:

“Pakistan isn’t like that anymore, there are many powerful men who would look at Sohail and his property and see a lamb fattened for the slaughter. And then, it’s as difficult to have a meaningful life with a lot of money as without. But my point is, he’ll follow you and do what you decide. I can’t do anything about it—if I could I probably would, because I don’t think you can make him happy, and I know he can’t make you happy.”

Although I enjoyed the tour of Paris, and the culture clash the story is about, the ending seemed muddled to me; I wished it had been stronger.

Next up: Salt Hill