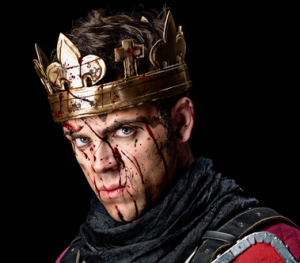 Every year the American Shakespeare Center‘s Touring Company returns to Staunton for the month of December. They perform A Christmas Carol and support the two one-actor shows that the theater produces during the holiday season. And they give local audiences a “sneak preview” of their touring shows that they will eventually bring back to the Blackfriars stage in the spring.

Last night I caught one of those previews, their production of The Life of King Henry the Fifth. I’ll have to wait a couple of months to see the others, but this one is definitely a winner.

It’s one of my favorite Shakespeare plays, anyway, I suppose because young Henry, so recently the mischievous Prince Hal, is in full command, a good guy who also has to be ruthless to survive. He’s also got one of the great inspirational speeches in all of Shakespeare as he leads his soldiers in the Battle at Agincourt, ending with these lines:

We few, we happy few, we band of brothers;
For he to-day that sheds his blood with me
Shall be my brother; be he ne’er so vile,
This day shall gentle his condition:
And gentlemen in England now a-bed
Shall think themselves accursed they were not here,
And hold their manhoods cheap whiles any speaks
That fought with us upon Saint Crispin’s day.

That scene chokes me up when it is done well, as it was last night by Ross Neal as Henry. The whole cast was wonderful, with some of the highlights being Andrew Goldwasser as Fluellen and Tim Sailer as the Dauphin. The scene between Katherine (Zoe Speas) and her attendant (Jessica Lefkow) in which Kate practices her English in anticipation of her betrothal to Henry was also excellent.

One of the wonderful things about this play, for me, is its structure, in which the Chorus guides the audience between England and France and back again and also encourages them to use their imaginations.

O for a Muse of fire, that would ascend
The brightest heaven of invention,
A kingdom for a stage, princes to act
And monarchs to behold the swelling scene!
Then should the warlike Harry, like himself,
Assume the port of Mars; and at his heels,
Leash’d in like hounds, should famine, sword and fire
Crouch for employment. But pardon, and gentles all,
The flat unraised spirits that have dared
On this unworthy scaffold to bring forth
So great an object: can this cockpit hold
The vasty fields of France? or may we cram
Within this wooden O the very casques
That did affright the air at Agincourt?

Taking the part of the Chorus is Josh Innerst who gives that voice energy, popping back in from time to time to keep the audience aware of where they are, and finally bringing the play to a close, but also slipping in and out of the other roles Innerst must play. As Chorus, he occasionally plops into an empty seat in the audience and watches the action unfold onstage. Very well done.

Music is a big part of the ASC experience, and this company is excellent. Not only are there some very fine singing voices–no point in naming names because that covers just about everyone in the cast–but also skill at several instruments, including trumpet, trombone, guitar, bass, flute, drums, and accordion.

It’s a terrific show, and I look forward to its return in the spring, along with The Importance of Being Earnest, Julius Caesar, and Arms and the Man.