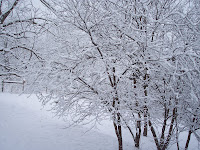 This picture wasn’t taken today, but it could have been. Lots of snow. It started at about dawn and it is still coming down (shortly after sunset). Normally, I wouldn’t care. I’d relax, work or read, listen to music, and let the world spin. Couldn’t do that today, though–too much going on.

First was the quarterly meeting of the Democratic Party of Virginia. I’m a member of the State Central Committee and since the committee doesn’t often meet in Staunton I definitely wanted to be there. I also wanted to be there because I’m on the Resolutions Committee and we had put forward a resolution encouraging our Congressional Delegation to support the Public Option. And, finally, I wanted to be there because we were going to hear from Senators Warner and Webb and Governor Kaine as well as other elected officials. Unfortunately, the Senators were stuck in Washington, not by the snow but by the Senate Majority Leader who was keeping people in town to work on the health care legislation. Both of them spoke to us by video. Governor Kaine was there, though, and he gave a rousing talk, as did Congressman Tom Periello. Our health care resolution also passed, so it was a good meeting.

And in the afternoon I was headed over to Stone Soup Books in Waynesboro for the first annual Holiday Book Fair. Stone Soup is a bookstore and cafe spread throughout an old house, and in its short life it has become quite popular. This event, which was very nicely planned an publicized, brought together quite a few local authors. The idea was that we’d be scattered around the store with our books and that visitors would pass through and chat. And that’s what happened, although the turnout (of both authors and visitors) was low because of the snow. (I had no trouble getting over there, but as I pulled in to park I skidded into the curb. The only damage, as far I’ve been able to tell, is that the hubcap popped off, but retrieved it so it isn’t a real problem.) Despite the weather, I applaud the store for putting on this event–it’s just the kind of outreach independent stores need to be doing. Thank you, Stone Soup!