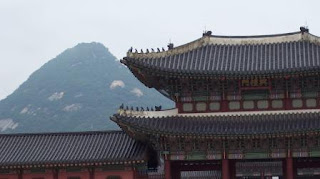 It rained heavily Friday night, but Saturday morning continued to be foggy and almost cool, with more rain threatening. More of our group arrived, so there was much sitting around the dining room getting to know each other, or catching up. But finally we roused ourselves to head out for our days.

I really wanted to go to the Folk Museum, which is inside the grounds of the Gyeongbukgoong, the main palace of Korea’s Jeoson dynasty. It’s a short walk from the hotel, and the visit brought back many memories. On my very first day in Korea in January 1976, this is where I went. We had just arrived and were staying in a cheap inn not far away, and it was bitter cold. We were due to travel down country to our training site later in the day, but first we wanted to do some exploring of our new home, so several of us found the palace. Now, though, the grounds are even bigger than they were then because the government has continued to work on restoration. It’s a little bit redundant, after a while — the very many buildings begin to look the same — but still it’s a great place to visit. And if it weren’t so humid, it would be a pleasant place to wander around. 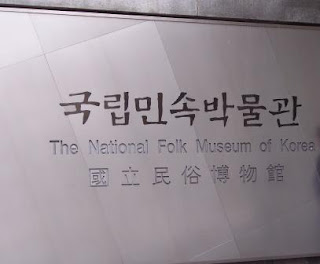 But then finally I made it to the museum. It was overrun with kids, who made the experience a little less enjoyable than it might have been, but I’m glad they were being exposed to it. Because much of what I saw in the museum was the way we experienced the country as Peace Corps volunteers.

I was particularly looking for exhibits about shamanism folk beliefs, and found only two. And some of the exhibits were repetitive of what I’d seen in the National Museum the day before, but still it was worth the visit.

I then walked to the other side of the grounds to the National Palace Museum. Drenched in sweat, I recovered a bit in the restaurant–a very nice, and very well-airconditioned place–with bibimbap and a beer, before exploring this museum, which is all about the royals. A nice contrast with the “folk”.

I explored the downtown area little bit more, found a bookstore I used to visit, an ATM, and generally walked around getting hotter and sweatier, before heading back to the hotel to rest before our group was to gather at 5pm. We assembled in the hotel lobby and walked together over to Insadong where we had the upper floor of Chon reserved for a makkoli party. And then a group of us stayed for dinner as well.

Some more pictures from the day: 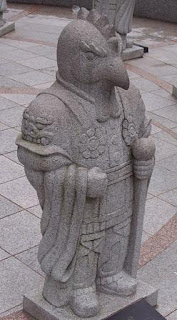