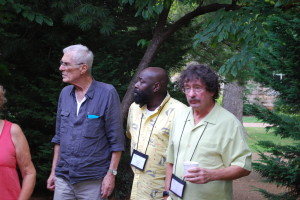 Friday’s weather continued our string of beautiful days, and as we were close to the end of the conference, our mornings began a bit later–the first reading was not until 10AM and featured fellows Charlotte Matthews, Andrew Milward, and Joseph Samuel Wright. (Charlotte is a friend from Virginia; Andrew is in the workshop I’ve been “auditing,” and Joseph is in my playwriting workshop.)

After that, Alice McDermott gave her craft lecture, which took a close look at some mistakes writers often take with exposition. In the afternoon we had one of the most stunning readings of the conference: Playwright Dan O’Brien read (with actress/playwright Lina Patel) the first act of his amazing play “The Body of an American.” Very powerful stuff.  Immediately after that I met with one of the playwriting fellows, Louise Munson, to talk about my work. It was a very helpful discussion and I appreciate her taking the time to do that.

In the evening we had a wonderful reading by poet Mary Jo Salter–a mix of older and new poems.

Saturday was a slower day. Instead of readings in the morning, the second group of workshops did their last sessions. In the afternoon we had the last set of fellows’ readings: Claire McQuerry; Joanna Rakoff, and Catherine Staples. Then we heard from Ran–dall Kenan, who broke his pattern and read four shorter pieces. And after our conference banquet (lots of wine, nice beef) we had a reading by Mark Strand. Mark’s work is . . . unusual, and his delivery is pure deadpan.

And that’s it. I stopped by The Pub for a beer–we had a band, the Nashtones–but then I headed up to the French House to end the evening.

I’ll have some reflections on the whole experience in the coming days. But now . . . to drive home.