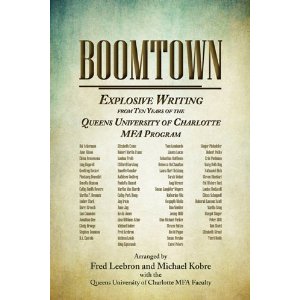 I’ve been browsing through Boomtown: Explosive Writing From Ten Years of the Queens University of Charlotte MFA Program. I’ve got a story in the anthology (“Justice, Inc.,” which first appeared in the Los Angeles Review) and I picked up a copy during the 10th Anniversary Celebration at Queens last weekend.

Because Fred Leebron is such a great teacher and writer, one of the first stories in the anthology I read was his.

“Two Germanys” is a flash piece that first appeared in Digital Americana, a magazine–actually, it’s an iPad App–that I hadn’t heard of before. (You can read the story and an interview with Leebron here.)

The point of view character is 46 and “his liver hurt.” He thinks it’s because of the drinking–he’s been drinking since the summer after 8th grade, and now his liver throbs. He’s looking for something to hold onto–if he could just clutch his baby, everything would be okay. Or he’ll be thirteen again–the summer he began drinking–and he’ll make a different decision. That was in Germany. But he then thinks of his sister, “carried off in a liver coma,” and that, too, was in Germany.