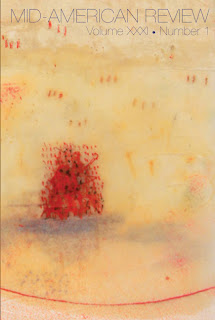 I’m a big fan of Kevin Wilson and his work, so I was thrilled when I picked up the latest Mid-American Review and saw that it included one of his stories. (We were delighted to publish Kevin’s “Another Little Piece” in Prime Number Magazine last year.)

“Intergenerating” is classic Kevin Wilson. The story features Boyd, an unemployed (directionless, clueless) man who lives with his mother and seems to spend his days sleeping. His mother, on the other hand, is wealthy, having inherited everything from her late, philandering husband, including a sizable settlement from the airline responsible for the crash that killed him. One day Boyd is awoken by a call, and all of his neuroses are revealed: “He had to sound like a man caught at his home by chance at eleven o’clock a.m., perhaps rushing home from his fairly lucrative job to eat lunch with the wife, who no longer had to work because of his aforementioned, though still detail-lacking, lucrative job.”

But there is no wife and no job. The call is an invitation to join something called Older/Wiser Bother and Sister Foundation and become a mentor to a disadvantaged youth. Despite his mother’s objection–she’s certain OWBSF is a fraud–Boyd joins. He goes through a brief training program, learns the ten commandments of being a mentor, and makes arrangements for his first outing with Raul, his mentee. Needless to say, it doesn’t go well, but the story gets funnier and crazier as it goes on.

I highly recommend this one if you can get your hands on the current MAR issue.