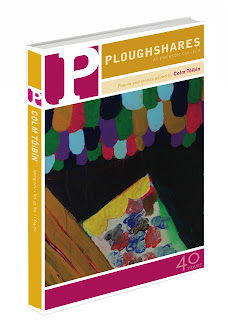 The story today is “Tiny Struggles” by Lynne Tillman, from the current issue of Ploughshares (Guest Editor Colm Tóibín).

Tiny, a former Soaps actor, has moved to a smaller town–he thinks of it as the country–three hours from the city. The town, either on its way up or down, is a mix of old-timers and city refugees like Tiny, and Tiny can’t be sure if he’s welcome in the shops. With the neighbors on either side he is on a nodding acquaintance. And he finds that what people do in the “country” is spy on their neighbors. He notices that a young woman from one house seems to be conducting an affair with a young man from another house.

Meanwhile, Summer becomes Fall–Tiny observes that change is constant–and he realizes he might need to find work soon. Or not: he might fall in love, he might win the lottery.

When the weather turns cold, the girl next door is kicked out of the house by her family, and she and the boy hint that maybe Tiny could take her in. But he can’t. Or won’t. And then the girl goes away.

This is what passes for struggle away from the city, apparently. But that’s all there is to it.

If I had to guess what Guest Editor Tóibín found of interest in the story it would have to be the bar where Tiny goes: “Tiny usually needed an incentive and took a seat at the long, white marble-topped bar. The only person he’d ever met, down one end, was a solitary, bookish man who dressed up as James Joyce, so Tiny forgot his name because he unfailingly thought, James Joyce.” Otherwise, I’m not sure . . .