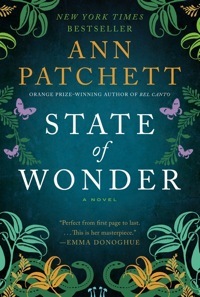 This week I read the novel State of Wonder by Ann Patchett. While there are aspects of the book I might quarrel with (the characters are mostly unlikable, and an element of the ending rang false to me), for the most part I thought it did exactly what a novel should—it entertained and enthralled. I wanted to keep turning the pages. I wanted to find out what the heck was going on and what would happen in the end. And it gave me some things to think about. A writer really can’t ask for more.

That was my reaction as a reader. As a writer, I had a slightly different reaction, and that was to marvel at the book’s structure. I recently read The Writers Journey: Mythic Structure for Writers by Christopher Vogler, which adapts Joseph Campbell’s The Hero with a Thousand Faces and applies the concept of the hero’s journey to the plots of films and novels. Now, I don’t know if Patchett had these works in mind as she was writing this book, but her plot is an almost perfect rendering of this classic story structure.

The following discussion contains some plot spoilers, so if you haven’t read the book, you might want to stop here.

Based on Campbell’s work, Vogler describes 12 stages of the Hero’s Journey:

I was serious about that spoiler alert above; here it comes!

In addition to these stages of the Hero’s Journey, Campbell and Vogler name the various archetypes of myth: Hero, Mentor, Threshold Guardian, Herald, Shapeshifter, Shadow, and Trickster. It isn’t difficult to assign these archetypal functions to the characters in State of Wonder.

This discussion doesn’t really help us understand the novel, and so familiarity with Campbell’s work isn’t at all necessary. But for me as a writer it is fascinating to see how another writer, whether consciously or not, applied this classic structure to her work.

4 thoughts on “State of Wonder by Ann Patchett: The Hero’s Journey”