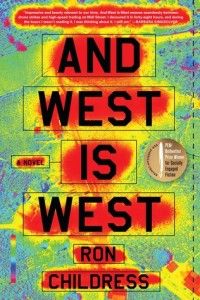 And West is West by Ron Childress

Winner of the Pen/Bellweather Prize for Socially Engaged Fiction, this novel tells the story of two Americans who grow disenchanted with the questionable ethics of their respective employers. Ethan Winter, a young quant, has developed an algorithm that helps a huge bank profit off of both terrorist and counter-terror activities around the world through automatic currency trading. An Air Force drone pilot, Jessica Aldridge, takes action against a terrorist but causes the deaths of children in the process, a result she has trouble living with. The two characters inhabit very different worlds, but the intersection of their stories is inevitable from the outset.

Along the way, we meet a cast of very odd characters: John Guan, an Asian American banker who puts on a “gangsta” act that masks his genius; Alex, a bisexual artist friend of Ethan’s who takes a commission from a Russian Billionaire, Sergei; Zoe, a woman with a mysterious past who works in international development and takes advantage of Ethan; a jailed drug dealer, the father of Jessica; a dying tattoo artist and her pot-growing husband; a couple of bumbling FBI agents who pursue Jessica; and more.

Although it is clear where the focus of the story is supposed to be, the author lets us into the heads of several of the other characters, which, combined with the presence of the FBI pursuit of one of the main characters and the national security issues at stake, gives the book the feel of a thriller.

Which leads me to why I read the book. It’s part of a panel I’m moderating at the Virginia Festival of the Book this month called Pirates, Drones, and other Catastrophes: Thrilling Fiction. The book’s focus on ethical questions makes it stand out from other thrillers, however, and that’s why it’s worth a read.