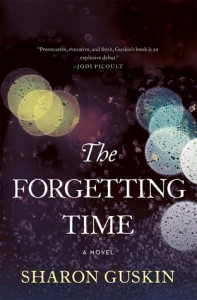 The Forgetting Time: A Novel

A couple of years ago, Dr. Jim B. Tucker of the Division of Perceptual Studies in the University of Virginia made an appearance at one of our local bookstores in Staunton, Virginia, The Sacred Circle. I wasn’t able to attend the event, but when I learned that he researches reincarnation, I picked up a copy of his book Life Before Life: A Scientific Investigation of Children’s Memories of Previous Lives

, which I discussed here. At the time, it occurred to me that the topic would make a great subject for a novel, and I thought if I ever finish the projects I’m currently working on I might tackle it.

, which I have and plan to read this weekend. I guess I don’t have to write that novel now, because Sharon Guskin has already done it.

I might have read Guskin’s book anyway, but I’ve read it at this time because I’m moderating a panel next month at the Virginia Festival of the Book called Life After Death: Hello from the Other Side and the author will be presenting The Forgetting Time there. I can’t wait to talk to her about it.

The book begins with a New York architect, Janie, taking a vacation to Trinidad where she has sex with another American. She becomes pregnant and eventually gives birth to her son, Noah. Noah is a handful and displays inexplicable behavior, including telling fantastic stories about experiences he can’t possibly have had. Worried about a possible diagnosis of schizophrenia, Janie gets on the Internet looking for alternatives, and finds the work of Dr. Jerome Anderson, who has written about similar behavior.

Meanwhile, Anderson has just received a diagnosis of progressive aphasia and knows that his time is limited. In order to complete his work on reincarnation, he needs to publish his latest book and for that he is told he needs one really strong American case.

So Anderson meets Noah and at first doesn’t think the case is strong enough, but gradually he becomes convinced otherwise and the research begins.

There isn’t much more I can say without spoiling the plot, so I’ll only comment that Guskin has written an engaging story that most readers, I suspect, will consider science fiction. But she has included some of Tucker’s actual case studies, and if one reads those, or reads Tucker’s books on the subject, it’s hard to come up with a plausible alternative explanation for those “children who remember past lives.”

In any event, the book is fast-paced and heart-warming, and I think it will appeal to a wide audience.