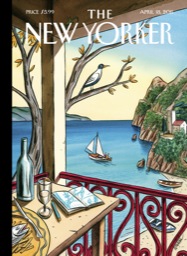 I guess I’ll give some allowances for this story, an appealing slice of a difficult life translated from the Russian, but if it were an American story I’d probably say that it doesn’t work.
The narrator is a Russian writer in the old Soviet Union, a widow with a child in a state sanatorium with asthma. Travel is expensive, so she’s hitchhiking to Lithuania—she spends a risky night with two truckers—and finally arrives in Vilnius, where she is aided by an old woman who lets her stay with her. She delivers some stories, in Russian, to the local paper, and she later receives money for their publication, translated into Lithuanian. She listens to the old woman’s sad story—her family burned to death while she was at the market—but then she must leave because (and now we finally learn her destination) she must get to Thomas Mann’s former home on the Baltic shore and then she must hurry back to Moscow to pick up her son. Briefly at the end of the piece she compares her own life—at least she can hold her son in her arms—to that of the old woman (“a withered branch on a dead tree”).
The whole piece is contrived to have the narrator meet the old woman, who otherwise doesn’t serve the plot—because there is no plot. So, as I say, it doesn’t deliver what I like to see in a story, but I did find the interaction between the writer and the old woman to be charming.
April 18, 2011: “A Withered Branch” by Ludmilla Petrushevskaya