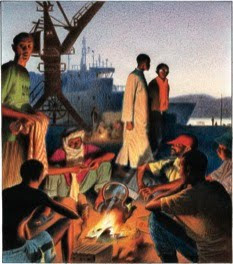 Here’s another installment in The New Yorker’s 20 Under 40 series, and yet again it isn’t a story. It’s an excerpt from Mengestu’s new novel—or at least that’s how I read the Q&A with Dinaw Mengestu and that’s also the only explanation for this piece of work. The frame of the story is the story of an Ethiopian who is teaching English in New York, and he’s telling the story of his father’s escape from Ethiopia, through Sudan.
He’s telling the story to his students instead of presenting the lesson’s he’s supposed to be doing, and that at least is interesting. He’s doing it because his father has recently died and because his father is speaking to him.
But the father’s story, although harrowing, is at such a distance from the reader that it lacks any kind of power or tension. We know what’s coming. The experience will be awful. But the way the story is told it’s hard to feel anything toward the father. What we feel—just as the young students feel—is about the son, the one telling the story, and in this excerpt we get practically nothing of him. Perhaps that’s in the book.
July 12 & 19, 2010: “An Honest Exit” by Dinaw Mengestu