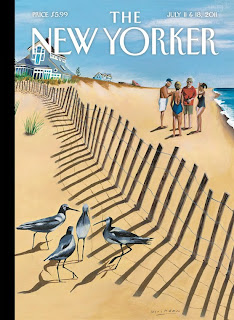 July 11 & 18, 2011: “Aphrodisiac” by Ruth Prawer Jhabvala
This story is okay. Nothing to write home about, so to speak. It deals with Kishen, educated in England, who returns to India with the dream of writing the Great Indian Novel. Meanwhile, his elder brother Shiv, successful in the Indian Administrative Service, marries a girl from the country. They all live together in the home of Kishen and Shiv’s mother, which suits Kishen fine as he is infatuated with Naina, his sister-in-law, who proceeds to have a couple of sons and gets Kishen, with the aid of the witch-like nurse, hooked on betel. He’s powerless against her.
Eventually, Kishen’s mother grows ill, whether because of the stress in the household or the witch-nurse’s poison no one is sure. The mother tries to get Kishen to apply to grad school in England, but under Naina’s influence he doesn’t apply, and lies to his mother about it. Shiv finally insists that the mother go to England to see doctors, and Kishen will accompany her. But, again Naina intervenes.
There is, perhaps, something going on her that the American readers won’t readily see. A commentary on contemporary Indian society, maybe? There certainly is a clash between the family of Kishen, which values education and enjoys a certain kind of taste, and Naina and her nurse, who represent a different aspect of India—crass, tasteless, greedy.
Is there more than that?