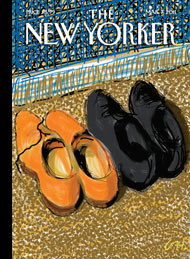 This New Yorker story is available for free, folks, so have at it. It’s more brilliance from David Foster Wallace. That’s the good news. The bad news is that it must be an excerpt from his posthumous novel, coming out next month. I don’t know that for sure, but this “story” doesn’t end, it only stops, and so I assume it is excerpted from something.
But, as I say, it’s brilliant. The story is about a kid who gets it into his head that he wants to kiss every inch of his body. To do so, he has to become something of a contortionist, and he develops this skill gradually. Reading how he does this is where Wallace is at his best.
The kid’s not the only contortionist in the family, however. His father is having multiple affairs, rationalizing each of them, twisting his logic in much the same way that his son is twisting his body.
Along the way, Wallace discourses on pain and the tolerance thereof:

In fact, patients who are critically ill or gravely injured do not necessarily experience intense pain. Nor is the observed intensity of pain directly proportional to the extent or severity of the damage; the correlation depends also on whether the “pain pathways” of the anterolateral spinothalamic system are intact and functioning within established norms. In addition, the personality of a neurotic patient may accentuate felt pain, and a stoic or resilient personality may diminish its perceived intensity.

Eventually, the boy has only his own head to conquer, but he’s confident he can do it.
March 7, 2011: “Backbone” by David Foster Wallace