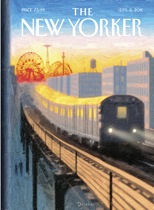 This “story” by Murakami is excerpted from his new long novel, coming out this year in English. (For a nice change, this one is not hidden behind TNY’s pay wall.) According to the interview with Murakami, the novel goes back and forth between realities. This piece, though, is mostly realistic, except for the internal story that Tengo, the protagonist, reads—“Town of Cats”—which is anything but realistic.

The excerpt stands reasonably well on its own, although it leaves a lot of questions unanswered. Tengo decides to hop on a train and go to visit his father who is in a sanatorium where he is being treated for a “cognitive disorder” (Alzheimers?). We learn that Tengo and his father are estranged, and that the father may or may not really be Tengo’s biological father. There is a shadowy memory Tengo has of seeing his mother with another man, and he is convinced that she didn’t die, as the father has always maintained.
On the train, Tengo reads the story about a man who arrives in a village occupied entirely by cats. Intriguingly, when the cats smell the presence of humans, the man is convinced he is done for, but the cats can’t find him. When he tries to leave on the train that brought him, the train won’t stop—as if the engineer doesn’t see him. While the relevance of the story Tengo reads isn’t clear in this excerpt, it isn’t hard to imagine how it could be important to the novel as a whole. Murakami says as much in the interview: “In any case, this episode performs a symbolic function in the novel in many different senses—the way a person wanders into a world from which he can never escape, the question of who it is that fills up the empty spaces, the inevitability with which night follows day. Perhaps each of us has his or her own ‘town of cats’ somewhere deep inside—or so I feel.”

Tengo arrives at the sanatorium and has an awkward visit with his father, in which they discuss the story about the cats, and also Tengo’s questions about his mother—questions that don’t get answered. Read the book, I suppose. Enjoyable “story,” though, so I just might.