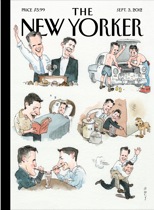 Like last week’s Alice Munro story, this one is available for free online. But here’s the scoop: Nora has returned from college to give it another try with her boyfriend Keith, a substitute teacher. (It’s the late sixties or early seventies, and the era supposedly has some bearing on how we feel about these characters.) They spend the summer together in a rented shack, but have to move when the colder weather arrives. They luck into a house-sitting gig on a lake in a development called Birnam Wood, and although they bicker about money Nora gets a job as a hostess in a restaurant. One night Keith hangs out in the bar there waiting for her to get off work. He drinks a lot and meets a guy named Steve, confessing to Steve that Nora is sometimes a pain in the ass. Steve leaves and Keith keeps drinking, so that Nora has to drive them home. And it’s snowing. They get home and Keith stays up but Nora goes to bed. The phone rings—it’s Steve, calling for Nora. Then Steve arrives with a bottle of tequila, hoping that Nora will share it with him. She agrees, and Keith goes out into the snow until he comes to another house where he watches through the window as an older couple get ready for bed. We’re left to guess what happens between Keith and Nora, but in my view it doesn’t look good.

As I was reading the story, I wanted to understand the title. Why Birnam Wood, with its echo of Macbeth? Boyle touches on that in the Q&A with T.C. Boyle, but his answer doesn’t seem satisfactory to me. This Birnam Wood isn’t marching to Dunsinane. And where’s Lady Macbeth? How is this in any way Shakespearean?

The contributor notes tell us that Boyle has a new novel coming out. I was hoping that he’d tell us that this story is an excerpt from that novel, but that doesn’t seem to be the case. It’s just a story. And as a story, to me, it’s flat.