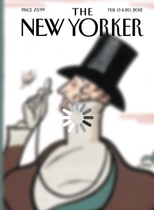 February 13 & 20, 2012: “Citizen Conn” by Michael Chabon
I have to say that, even though I found the ending somewhat unsatisfying, I liked this story a lot.
It’s the story of Morty Feather and Artie Conn, two giants of the comic book industry who years ago had a falling out. Now Morty is living in a nursing home in Santa Monica, near death from bone cancer, and Artie, retired to San Diego, is seeking forgiveness. No one can quite figure out why Morty is so upset with Artie, least of all Rebecca, the new rabbi in the nursing home.
So, Artie makes several visits, tries to apologize and give Morty credit that he might think is due him. But that’s not it. There’s something else. And that something else is—sort of—revealed at the end. But Artie still doesn’t get it, probably because what Morty wants is something Artie can’t really give him at this point.
It’s a nice piece about friendship, and along the way Chabon gets to write about comic books again. There’s also a brief interview that’s worth reading: This Week in Fiction with Michael Chabon.
Apart from the slightly unsatisfying ending, my one concern here was with the narrative voice. I like the choice of the female rabbi, although (a) it isn’t clear why it should be a female except that it’s interesting that her husband is a fan of the comics, and that feels right; (b) the title of the story is too cute; and (c) I wonder if this is a credible female voice. I can’t really tell, and I’d welcome comments from women about this.
[Also, I hate this week’s cover, which is called “Loading,” but since I’m reading the Kindle version I don’t have to look at it much.]