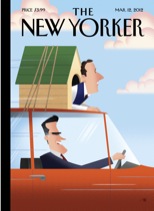 March 12, 2012: “Ever Since” by Donald Antrim
Every once in a while, the New Yorker story is actually set in New York. Often, it seems, such stories involve a cocktail party. That’s the case here, where a litigator has gone with his book-publicist girlfriend to a book launch party in an expansive loft apartment. Jonathan likes his date, Sarah, but he can’t stop thinking about Rachel, the woman who left him for another man, the woman whom he wanted to marry but had not summoned the courage to do so. At the party, he frequently refers to Rachel—what she said, what she thought—as if neither he nor Sarah has anything interesting to contribute. He drinks too much. He goes in search of cigarettes that he doesn’t find, but eventually he lights a joint that he shares with Sarah and others. He tries to propose to Sarah, using a cherry stem as a ring. She’s unimpressed, but she’s still with him at the end and they seem comfortable.
Not very exciting, as stories go, but it’s noticeable that it relies heavily on the moment. That is, there are few flashbacks, despite the fact that Jonathan is dwelling on his dead relationship with another woman. That helps make an otherwise uneventful story keep its hold on the reader, I think. A lesson worth noting. Antrim comments on that in Q&A with Donald Antrim.

2 thoughts on “>The New Yorker: "Ever Since" by Donald Antrim”