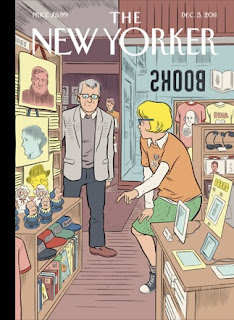 December 5, 2011: “The Musical Brain” by César Aira
Chris Andrews, translator
The story begins normally—a family is out to dinner at a hotel restaurant. But then the oddities begin to pile up: a possible book drive being conducted in the restaurant; a visit next door to the theater to see the “musical brain”; a visit to the circus, recently rocked by a scandal involving twin dwarves and the dwarf wife of one of them; and then the bizarre incidents in the theater involving the “musical brain” and the dwarves, AND the former head librarian and school headmistress, who can’t be who the narrator recalls she is.
Fortunately we have the Q&A with the Translator to confirm that this pattern is not unusual for this author:


“But as anyone who has read him knows, the ‘correctness’ is only syntactic: his sentences are well formed, as the linguists say, but his stories and his books are, well . . . deformed, swerving wildly, jumping from one kind of fiction to another, as in ‘The Musical Brain.'”


Good to know. As for what it means . . . the bizarre incidents coincide with the founding of the town library, and so the egg we see at the end (laid by the dwarf and protected by the librarian) would seem to represent literacy, or possibly imagination, since the narrator’s own imagination seems to have taken flight as a result of witnessing the events.


Or maybe it’s just an egg.


In any case, it’s an intriguing read. i’d be interested in seeing more of his work.

1 thought on “>The New Yorker: "The Musical Brain" by César Aira”