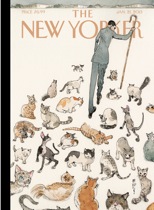 I didn’t want to like this story because I think the New Yorker publishes too many Hadley stories. (Or it just seems that way; there was only one in 2012 but four in 2011.) Usually they’re quite good, though, and, reluctantly, I have to admit that this one is, too.

Laura is splitting from her husband—his idea—and since she can’t afford the rent on their flat, he suggests that she leave. (Thoughtful, no?) She has no place to go, but she lucks into a house-sitting gig when Hana needs to go to the States for a few months. It sounds like a great house, Hana give her the run of the place, and it’s just what Laura needs. Laura, though, is a snoop (not that I blame her, honestly), and when she realizes that Hana has tucked a lot away in the locked attic, she looks for the key and pokes around. And she finds some interesting stuff, including sex toys and a racy diary of Hana’s affair with someone called Julian.

Who promptly shows up! His arrival is owing to some camping gear stowed in Hana’s house—in the attic. He retrieves the gear but then comes back, asking Laura if he can leave some other personal things in the attic because he’s leaving his wife. Laura, who hasn’t been doing anything and is running out of money, is turned on by Julian (and by her reading of what he and Hana had been doing), so she’s quite happy to have him back. He even cooks her dinner (she nearly faints from hunger after a glass of wine) and Laura is more than open to the idea of seduction. But then . . .

The story is not behind the paywall, so you can read it for yourself.  I liked the ending because it seemed to be heading in a fairly trite direction, but then swerved. The characters here—at least Hana and Julian—are memorable. I don’t have nearly as clear a picture of Laura, except when she’s dressed in Hana’s clothes. All in all, Laura’s stay at Hana’s place is quite an “experience,” to echo the story’s title, and Laura discovers that she’s not quite as inexperienced as she thought she was. She’s able, with this discovery, to move from her ex-husband.

I liked it. Early front-runner for Story of the Year. (The link for the Q&A with Tessa Hadley wasn’t working when I posted this, so I shall return to update the post when it is.)