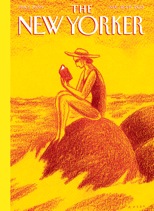 I see no helpful Q&A with Zadie Smith to guide us through this story, so we’re on our own. (If you’ve come across the Q&A, please leave a comment.)

It’s the future, I guess. Billy Peek is 15, traveling with his father and is currently on the UK coast trying out some new-to-him technology when he meets Melinda, 49 , and Aggie, 9. The technology appears to be video-game like and Billy is moving through levels, his goal being to wipe out guards outside the Oval Office and meet the president.

But the woman and child—not related, Billy knows by doing a scan with his machine—are on their way to the funeral of Aggie’s older sister. In this post-apocalyptic (apparently) world, the sister had survived as a whore, but maybe there’s more to it than that. When Melinda disappears (why?), Billy helps Aggie get to the funeral (which isn’t really a funeral and isn’t really in a church). As they walk, Billy is distracted from his game and . . .

I’m not really sure what happens, although in the end Billy is forced to see reality—and real dead girl.