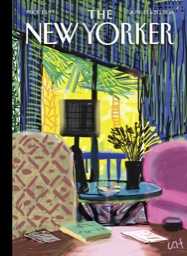 June 13 & 20, 2011: “Home” by George Saunders
The summer fiction issue is pretty excellent. All three stories are terrific, and there are some other nice features, as well.
The first story—at least in the order they appear on my Kindle—is “Home” by George Saunders. It reminded me of “Soldier’s Home”  by Ernest Hemingway, although maybe that’s inevitable for any story that is about a soldier’s homecoming. Here, Mike has come home from war in the Middle East to find his foul-mouthed mother living with Harris, her new man, a lazy liar. Harris and Mike’s mother make quite a pair. Mike goes to visit his sister Renee, who has a new baby. First, Mike eavesdrops on Renee, her husband, Ryan, and Ryans parents—an opportunity for Saunders to reveal character and have some fun at the same time.’ When he finally reveals himself to Renee, she won’t let him in—because she’s ashamed of her family (justifiably, it would appear). Before he goes, though, she asks, “Did you do it?” Huh? So, now we know that Mike did something, or was accused of doing something.
When Mike gets back to his mother’s house, she and Harris are being evicted for non-payment of rent. He puts a temporary stop to the eviction, and then goes to visit his ex-wife and kids, but his wife’s new husband tells him it’s after midnight and too late for a visit (it’s actually only 9pm), so he agrees to come back the next day. (The guy is classic Saunders, explaining how challenging his affair with Mike’s wife was: “It was hard for me because I felt like a shit, and it was hard for her because she felt like a shit.” He wants Mike’s sympathy because of how bad they both felt.) The next day, after a confrontation with the sheriff at his mother’s house, they all go over to Renee’s. “Oh, this will be funny,” thinks Mike, and it is. Among other things, since Renee and Ryan won’t let him hold the baby, he breaks a pitcher of tea. When he calls to apologize, she says he’s going to buy a new pitcher. “No,” he says. “I don’t think I’ll be doing that.” Hah! And when Renee asks him where he’ll go, he says, “Home”—the title of the story.
And eventually we find out Mike’s story—that he did something during the war that got him court-martialed. And you get the sense that he might not be done.
Saunders, it seems to me, is exploring a few different themes. What does home mean? Mike’s mother lives in a dump–until she’s evicted–but Renee and Mike’s ex-wife both live in very nice houses. Home also means family, but it isn’t clear that family means too much here. And at the end of the story, Mike is headed home, which might be heading back to the feelings he had in the war. Then there’s also the problem of becoming desensitized to the pain you’re causing–Mike in the war, plus everyone else in the story.
For a quick interview with Saunders about the story, check out Summer Fiction: George Saunders.
I’ll be dealing with the other stories shortly.