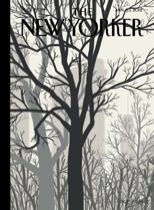 January 23, 2012: “Labyrinth” by Roberto Bolaño
The Q&A with Barbara Eppler, Bolaño’s first American Publisher, is interesting, but of no help with this story, which I think I love. I say I think I love it because I don’t know that I have the energy to unpack it to see what’s there. If there’s nothing underneath the dazzling language and the manipulation of time, then I might like it less.
The story is based on a picture, and that picture appears to be the one in the magazine illustrating the story—take a look at it as you read the description of the people he names. I’ve reproduced it here, although when I read the story on my Kindle I hadn’t yet seen it. He’s describing this table and these people in great detail, whose actual names he uses, and then, I suppose—although I have no way of knowing—he is fabricating the rest: what they do with each other outside of the picture, what is happening beyond the picture’s frame, etc. 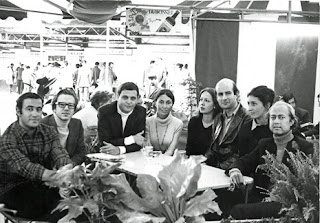 What appeals to me here isn’t so much what happens, but the intersection of the real and the imagined, which includes a person who isn’t in the picture at all, and also the way in which the characters, as time passes, have lives outside of the picture but are also always frozen in the photograph.
After the detailed description of the people in the photograph, about a third of the way into the story the author begins to imagine: “Let’s imagine J.-J. Goux, for example . . .” He has Goux leave the picture and walk down the street. Then he imagines that some of the people are looking at someone out of the frame, and imagines this might be “a young journalist from South America, no, from Central America.” He goes on to suggest that there may be something sinister about this journalist, that he’s bitter and will do some harm. It’s wonderfully imaginative, even if in the end it doesn’t produce any real action.
What do other people think? Or do you know something about the people the author has named here?

5 thoughts on “>The New Yorker: "Labyrinth" by Roberto Bolaño”