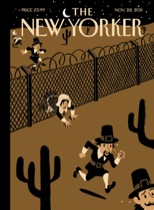 November 28, 2011: “Leaving Maverly” by Alice Munro
Maybe I’m just not in the mood for a Munro story, but this one leaves me cold. Like many of her stories, this one covers several years—proving that short stories don’t have to focus on a short period of time. The problem with trying to fit a long period of time into a short story, however, is that it is difficult to achieve much depth. The reader is always skimming the surface, it seems to me, and unless the occasional dips into the water are sustained, the author risks losing the reader altogether. Which, for me, happened here.
The story is about Ray, the night policeman in a small town, and a young girl, Leah. The girl is from a very strict household—one in which the wife and children aren’t allowed to leave the house—but she is given permission by her father to take a job as ticket taker in a theater (as long as she doesn’t watch or even listen to the films). But she needs an escort to walk her home on Saturday nights, and Ray performs that duty. Ray, meanwhile, is married to Isabel, who left her husband to marry him. But she develops pericarditis and is often too weak to do anything. When Leah disappears, Ray joins the search, but the girl isn’t found because, in fact, she ran off and married the minister’s son.
And so on—Isabel gets sicker, Leah’s marriage goes bad, and eventually, years later, they meet again in the hospital in another city. And maybe they’ll get together, and maybe they won’t, but I don’t think I care. The story is so much on the surface that I don’t engage with any of the characters.
I’d be interested to know how others reacted to this one. I’m a fan of Munro, but not this story.