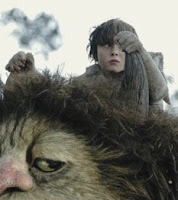 This is an excerpt from Eggers’s new book, due out in October. It’s based on his screenplay, which is based on Maurice Sendak’s “Where the Wild Things Are.” I dislike it on multiple levels. It’s an excerpt. It’s doubly derivative. And although the writing is fine and fluid, the story is . . . not. Max is a kid with a wolf costume who argues with his sister, his mother, and his mother’s boyfriend. He runs out of the house, into the night and into a different world: “The air and the moon together sang a furious and wonderful song: Come with us, wolf-boy!” He finds a boat and sets sail, but instead of heading to sea he goes across the bay to the city where his father lives. But he can’t get there and ends up in the open sea after all. To pass the time, he recalls everything and everyone he knows. Eventually, he comes to an island, still wearing his wolf suit. As he makes his way on the island, he discovers animals, large beasts he doesn’t recognize. He tries to hide from them, but he overhears them talking, and learns their names: Carol, Douglas, Judith, Ira, Alexander, Bull. Carol, the leader, wants help to finish the job of destroying some nests the beasts have found. So Max volunteers and together he and Carol do the work. But it turns out they’re destroying their own nests. And the beasts turn on him. But he slows them down by telling them a story . . . declares himself king. Still, it isn’t clear that they aren’t going to eat him.

Waste of time, waste of New Yorker ink. In my opinion.